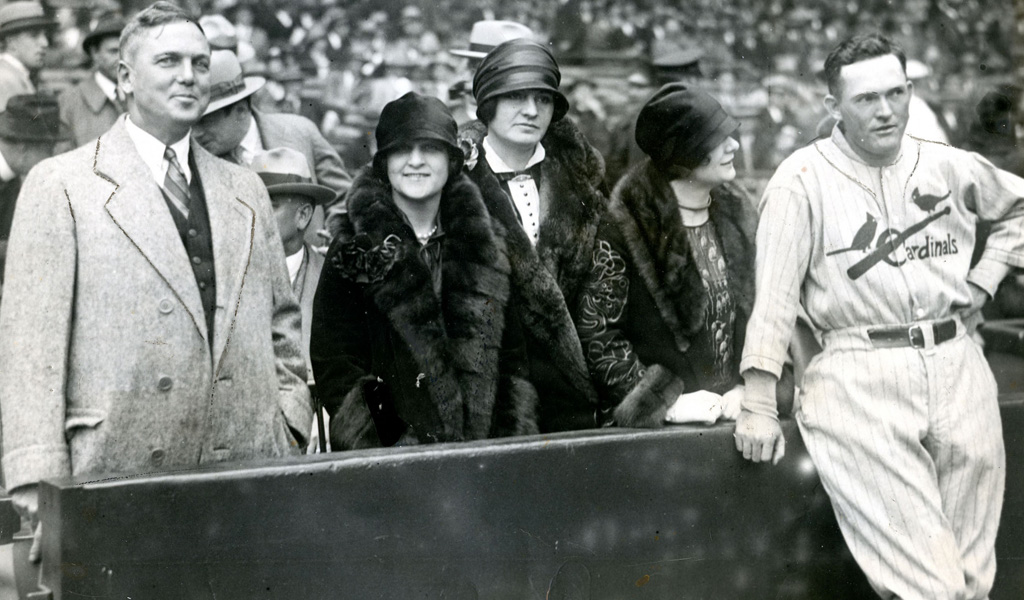 Salty snacks and beer aside, being involved in sports as a spectator has myriad health benefits.

You know that feeling of being on the edge of your seat during a particularly close game? That combination of dopamine and adrenaline you experienced when your team was up one point with 30 seconds to the final whistle is called eustress, or positive stress. It’s that feeling of excitement and fulfillment, and it can give us a massive blast of motivation and positivity.

Being part of something bigger than yourself–in this case, a fan club, official or unofficial–gives us a sense of community and belonging. Humans are tribal by nature, and tribes can come in any shape or jersey color.

Carving out time to watch our favorite players gives us something to look forward to, an opportunity to escape from daily stresses, and time to connect with loved ones over your shared disdain for the other team. Especially that guy who always skirts the offside rule and gets away with it.

St. Louisians are particularly passionate about two home teams: the Cardinals and the Blues. Both teams have a checkered history that includes near misses with relocations and bankruptcy, mixed playing records, and prominent St. Louis business people stepping in to exert their influence.

Buckle up…here’s a brief history of each team.

The beloved St. Louis Cardinals has a pretty wild history. Now the second most successful team in MLB history with 11 World Series titles, the team nearly folded before it began.

The team as it is today was established in 1875 as the St. Louis Brown Stockings. Due to mismanagement, the official Brown Stockings also folded in the very same year.

They continued to play an unofficial five-game “Championship of the West” tournament against arch rivals the Chicago White Stockings, which they won 4-1. Again plagued by mismanagement and this time a brush with a bankruptcy scandal, they were blocked from the official league and continued to play as an independent barnstorming team, traveling for exhibition matches.

The Browns, as they became affectionately known, were bought in 1881 by St. Louis entrepreneur Chris von der Ahe. While he turned their financial woes around, he didn’t necessarily improve their playing record, with a less than stellar win/loss ratio for their first 28 seasons.

Although 1882 is considered the first season in Cardinals’ history, they weren’t officially renamed until 1900 after a fan remarked on the “lovely cardinal red” trim on their otherwise brown uniforms.

Switching owners again in 1927, the stars aligned for the Cardinals the following year with their first World Series title, followed closely by titles in 1930 and 1931.

The Cardinals are now one of the most beloved institutions for St. Louisians. With the $365 million Busch stadium opening in 2006, The Cardinals continue to sell out almost every one of their 81 home games each season.

Although they have a slightly smoother origin story than the Cardinals, the St. Louis Blues hockey team almost didn’t make it to the Midwest at all.

Part of the six new teams added to the NHL in the 1976 expansion season, the Blues were originally destined for Baltimore. The owners of the Chicago Blackhawks–who happened to also own the ice hockey arena in St. Louis–convinced the league to locate the team in the Gateway City instead.

One of the most consistent teams in NHL history, the Blues have qualified for the playoffs in all but nine of their 52 seasons, reaching the Stanley Cup in their very first season in 1968 then again the following two years.

After a few terrible seasons—the 1979 season is still the worst season in franchise history—the St. Louis Blues finished with a then-franchise-best 45-18-17 regular-season record in 1981. This record translated to 107 points, making the Blues the second-best team in the league that season.

Although the St. Louis Blues achieved considerable success on the ice, off the ice was a completely different story. The ownership was locked in some significant legal battles with the NHL, and in 1983, businessman Harry Ornest and a group of St. Louis-based investors took over the team and the Checkerdome, reverting its name to the St. Louis Arena. Ornest ran the Blues on a tight budget, and the franchise remained competitive for the three years he owned the team.

The Blues finally reappeared in the 2009 playoffs, ending a five-year playoff drought. Unfortunately, the Vancouver Canucks swept them in the first round.

They finally cracked their Stanley Cup curse in 2019, winning narrowly over long-time rivals the Boston Bruins. Many Blues fans still get a glassy-eyed, distant look on their faces when talking about that season.

Although they lost in the playoffs in 2000, their consistency was recognized that year when they were awarded the President’s Trophy for the best record in the league.

For more on the history of the Cardinals, we recommend Peter Golenbock’s book, The Spirit of St. Louis; and for some inside stories on the Blues, Bob Plager’s book Tales from the St. Louis Blues Locker Room.